By now you may know that I recently moved to the City. Shock. Horror. Hardly.

Sometime last year I stumbled across a flyer for Mainstreet Walks and slipped it into my memory bank never thinking it’d come in handy quite so soon. Months later once we’d moved into Town I knew it’d be *the* coolest way to get to know our new neighbourhood.

Up bright and early one Saturday morning (plan well, the tour starts at 9am and runs Saturdays only), we started the tour by meeting at Arts on Main – the heart of the Maboneng Precinct and the revival of the inner city. I could go on and on about Arts on Main itself, but I’ll leave that for another blog! 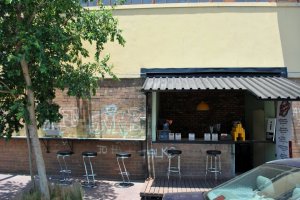 We grabbed coffee at Uncle Merv’s on Fox Street and met our very capable and very cool tour guides (born and buttered in Jozi – their words!) and the other participants – two foreign couples. It kinda made me sad that there were no other South Africans on the tour – but this was quickly forgotten when I saw their unbridled enthusiasm for the next few hours ahead of us.

I don’t think I can do justice to this experience, but I will certainly try. Forget everything you know. This is a totally different day out.

The entire tour is done on foot and later on we used the BRT and I even had my first experience in a Jozi taxi – thankfully Bheki, one of our guides knew all the hand signals!

We made our way down Commissioner Street whilst the city was slowly waking up. 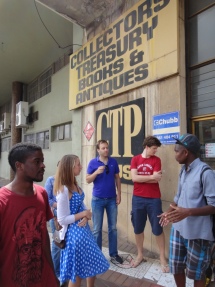 We visited the largest second hand bookstore in the Southern hemisphere. There are books stacked everywhere and I mean everywhere in this 8 story building. More than that, there were also LP’s, maps, postcards and even an antique store within the bookstore.

It’s the kind of place you need hours to really soak up with a good cup of coffee in hand.

The antique store – I have to come back – so many things caught my eye, so little time… 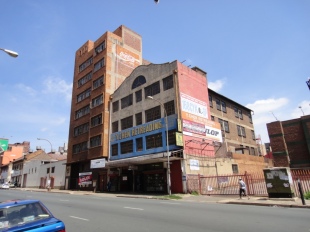 Loads of interesting sights as we walked the streets and glorious weather helped too! 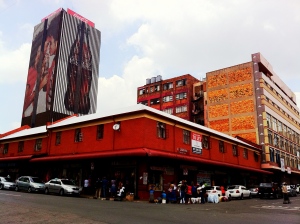 By mid morning the city was bustling. There was so much to take in everywhere that I had to stop myself from stopping and just staring. Lucky this is all quite literally on my doorstep now! 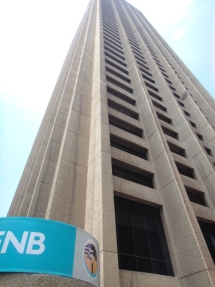 The next stop was Carlton Centre. Once the place to be and be seen. At 50 stories and 222.5 meters high she’s Jozi’s beloved skyscraper and shopping centre located downtown. It took 2 years and R88 million to build. Officially opening in 1973, it was originally owned by Anglo and today its the head office for Transnet. It was the tallest building in Africa for almost 40 years.

On the 50th floor is a viewing deck with hands-down the best view of the city you’ll ever see…..

Days later I returned to Carlton Centre to pick up a few groceries after work and was pleasantly surprised by the vast array of stores (over 180!) including department stores like Levis, Spitz & San Marina.

Our tour guides treating us to some poetry. 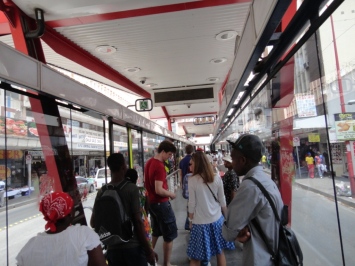 Back on the road. Well the BRT…. Super efficient, clean and convenient! 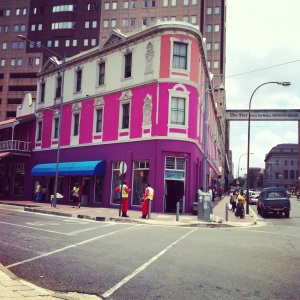 Cheating spouse? Bad luck? Need a spell cast on your enemy? No problem! If you have an ailment there’s an antidote to be found on Diagonal Street. The street is lined with stores all offering herbal cures and the services of traditional healers that can fix well, anything!

We walked through parts of Newtown which probably is the one area in the City people have been to – I love the Market Theatre in particular – makes for an old school date night!

China Town was a highlight of the day and it happened to be Chinese New Year when we took the tour so the streets were decorated and busy.

A personal favourite was seeing Nelson Mandela’s first law office, Chancellor House, on Fox Street – literally a 2 to 3 minute walk from what I now call home. I’d probably passed by so many times without realising the significance. Full restoration of the building was completed in May, 2011. 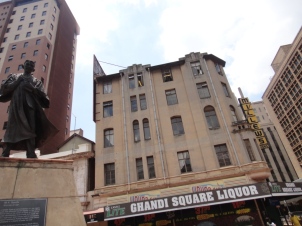 Gandhi Square (formerly Van Der Bijl Square) is a plaza located in the CBD. Named after Mahatma Gandhi, back then, it was falling apart & was in the centre of one of Johannesburg’s most destitute neighbourhoods.

Then, in the early 1990s, Gerald Olitzki, a property developer, approached the government with the project. Although initially denied, the project was eventually undertaken with the support of the government, and was finished in 2001, at a cost of approximately R2 million. The local bus terminal has also been renovated and there is now 24 hour security and many of the shops along the square have returned.

From there we caught a taxi back to Arts on Main – another (Jozi) first for me!

The Inner City Tour gives you a peak into the City’s best kept secrets enabling you to touch and feel Jozi’s most magnificent heritage sites. It’s a complete cultural mix, exposing parts of the city that most people are reluctant to visit and probably only experienced on TV or through here say, which really, is not at all.

This tour is your all access pass to JHB CBD and outer suburbs – like you’ve never experienced her before. And in the flesh she’s lovelier than I can ever describe.

The tour costs R180 per person and is all-inclusive of your morning coffee and all transport/entrance fees. Wear flats, (it is a bit of a workout!) sun screen and have some cash in case you need water or something catches your eye. There are a variety of other tours available and more to come, I’m told.

1 Response to I’m in lust